Each of us has approximately 100 billion neurons, which are the nerve cells that transmit information within our brains. These neurons connect to other neurons in vast, complex networks and communicate with each other through electrical impulses. These electric currents traveling between neurons are sometimes called brain waves because of their cyclic wavelike nature (see image below). Brain waves can be measured using an electroencephalograph (EEG) which uses hundred of electrodes to measure the frequency of brain waves in cycles per second or Hertz (Hz). The results of EEG studies show that there are four main kinds of brain waves: delta, theta, alpha, and beta. These studies also show that these brain waves are correlated with our state of mind. 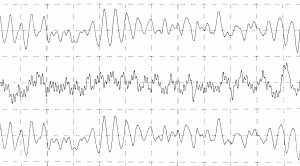 Delta waves (~0.1 – 4 Hz) are the slowest of the four brain waves and are associated with deep dreamless sleep. It is when the brain is in delta state that the body repairs itself.

Theta brain waves are faster than delta and have a frequency of  about 4 – 7 Hz. Theta state is associated with the early stages of sleep and deep meditation. Memories are processed and stored when our brains are in theta state. This is why a good night’s sleep is so important. Memory formation and hence learning depends upon it.

Beta brain waves (~13-30 Hz) are the fastest and are associated with normal alert consciousness. This is the state in which we spend most of our lives. When we are in beta state, our brain is constantly changing focus from one thing to another. This is great for things like driving, shopping, or parenting where you have many different things to focus on. However, beta state is not the best state to be in for learning. That state is alpha state.

Alpha brain waves have a frequency around 7 – 13 Hz and are associated with being awake and alert but relaxed. When we are in alpha state, our brain is functioning most efficiently. We can harness our brain’s full resources and focus deeply on one thing. Athletes and performers who are in the “zone” are operating in alpha state.

As a student, this state is the holy grail for learning. If you want to learn most effectively, you want your brain to be in alpha state. It is the optimal state to be in for learning.

One Response so far.