I normally consider myself to be an upbeat, positive, and action-oriented person. However, this academic year has been very challenging for me and I found myself complaining – a lot! Even though I am well aware of the damaging physical and emotional effects that complaining can have, I still fell into an unhealthy pattern of complaining on a daily basis. Since I wasn’t actually doing anything to resolve the issues I was complaining about, the end result was that I was making myself unhappy by focusing all of my energy on the problems and not the solutions.

Luckily, about two weeks ago, I came across a blog by Tim Ferriss called: “Real Mind Control: The 21-Day No-Complaint Experiment”. In his blog, Tim writes about the results of his experiment to go 21 straight days without complaining about anything. After reading Tim’s blog, I decided that this was an experiment that I needed to do for myself. Before I describe the experiment, let me first give you a little background.

The experiment is the brain-child of Will Bowen, a Kansas City minister who recognized the power behind the words that we use. To help his congregation become more aware of their complaining, Will created purple Complaint Free bracelets as a tool to monitor how often you complain. The bracelets work by wearing one on either wrist and then switching wrists any time that you complain. The goal is to go 21 straight days without complaining or switching wrists.

The bracelets spread like wild fire and Will eventually created a non-profit organization, A Complaint Free World, whose mission is to inspire 60 million people to “leave the toxic communication of complaining behind and experience an internal shift toward being more positive, hopeful and optimistic.” 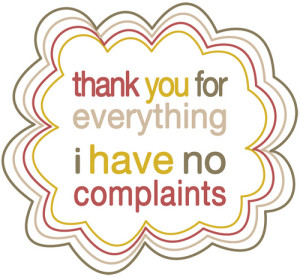 I decided to do the experiment myself using a rubber band instead of the purple bracelet. (I ordered bracelets but they have not yet arrived.) I started the experiment a little more than a week ago and it has turned out to be much more challenging than I thought it would be. Part of the challenge has been deciding exactly what constitutes a complaint. Is it complaining to mumble out loud to yourself after your cell phone butt-dials someone? What about stating how mentally deranged someone must be to plant explosives at the Boston Marathon? Or how about using a four-letter word to express exasperation?

I finally decided to define complaining the same way that Tim does in his blog: “describing an event or person negatively without indicating next steps to fix the problem.” Using this working definition, it is acceptable to describe a problem as long as I indicate steps to resolve it. For example, it is acceptable to say “Traffic was awful this morning so tomorrow I am going to leave 20 minutes earlier.” However, “Traffic sucked this morning!” would definitely count as a complaint. As with Tim, I also decided to include as a complaint the use of 4-letter words (and other common profanities) to express exasperation.

As of now, I have yet to make it longer than one and a half days without complaining. I have been thwarted by traffic (twice), a slow internet connection, the world’s smelliest diaper, my dog, and several work-related issues. Usually, the complaint was out of my mouth before I even realized I was saying it. One of the benefits that I have already gotten from this experiment is the awareness of how often we complain without realizing it. It has been said the average person complains between 15 and 30 times a day. I believe it.

It takes most people between 4 and 8 months to complete their experiment and go 21 straight days without a single complaint. I am hoping to complete mine by the end of the summer, which will be a little more than 4 months total. I will continue to wear my bracelet everyday and switch wrists whenever I complain until I can go 21 consecutive days without complaining.

I would love it if you would join me on this great adventure. I will give the first ten people to post a comment below and join me in this experiment a free purple Complaint Free bracelet. 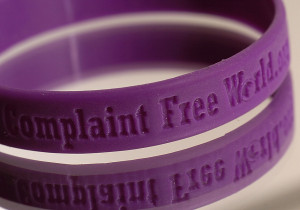 I will post updates on my progress in future posts so stay tuned. Until then, here is a quote that nicely summarizes one of the reasons I am doing the 21-day no-complaint experiment:

“If you took one-tenth the energy you put into complaining and applied it to solving the problem, you’d be surprised by how well things can work out … Complaining does not work as a strategy. We all have finite time and energy. Any time we spend whining is unlikely to help us achieve our goals. And it won’t make us happier.”  ― Randy Pausch (from The Last Lecture)