For the faithful readers who have been following my blog, you may have noticed that I haven’t posted anything for more than 2 months. I apologize for that and hope I haven’t lost too many readers. The final push to get my book finished and published by April 10th (my self-imposed deadline) was exhausting; I needed a break. That combined with the end of the school year and two big funshops lead to a 2 month hiatus from the blog.

The good news is that I’m back. And, I am proud to say that I am now an international #1 best-selling author! Woo hoo! My book, Accelerated Learning Techniques for Students: Learn More in Less Time has done much better than I  hoped it would. Initially, I just wanted to break into the top 100 in one of my two categories (Study Skills and Study Guides) on Amazon.com. Then, I could cross off becoming a best-selling author from my bucket list. It turns out that I set my sights way too low. 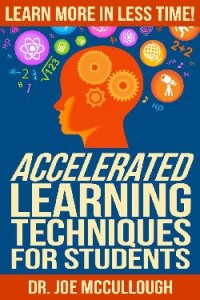 Thanks in part to a well thought out marketing campaign and a very successful funshop the night of its release, the Kindle version my book became a #1 best-seller in both Study Skills and Study Guides. The paperback version became a #2 best-seller in Study Guides. In addition, the Kindle version has reached #1 in France, Brazil, Canada, Mexico, Australia, and Germany, #2 in the UK, and the top 10 in several other countries. It continues to be on the best-seller lists in most countries where it is available.

Now it is time to switch my focus back to this blog and giving you great content that will help you learn faster.  The exciting news is that I’ve decided to start adding video content. I just bought a nice video camera and will be spending much of the summer learning how to shoot, edit, and post high quality videos for this site.